In the offices of 121 Direct Mail we are lucky enough to house two pieces of Postal History purchased at a charity auction in early 2000.

The two pieces are:

A Postman Pat picture by signed John Cunliffe the creator, showing of all the handmade characters used in the making of the original series, we believe there were only a small number of copies made just for the staff and voices in the show, but this is possibly the only signed picture. 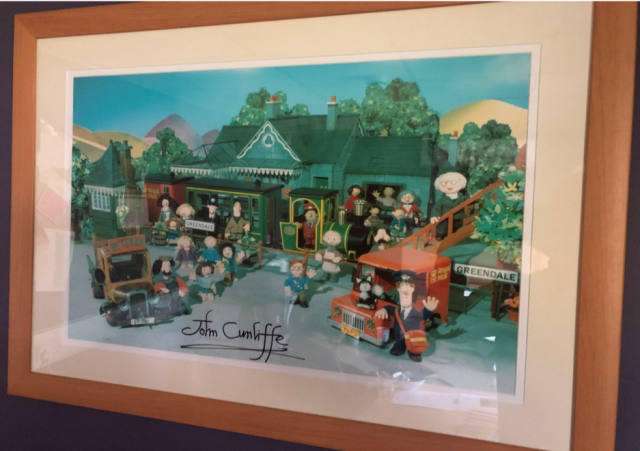 Under a glass dome, the Postman Pats actual sack of mail used in the filming of the original Postman Pat series. All handmade and hand painted, the top letter in the sack is addressed to Ted Glen, Black Moss Cottage, Greendale. 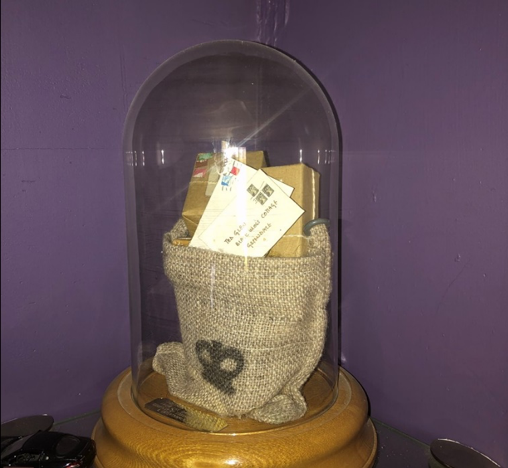 John Cunliffe’s family placed a death notice in their local newspaper, the Ilkley Gazette, announcing that he died on 20 September and was buried after a private funeral. 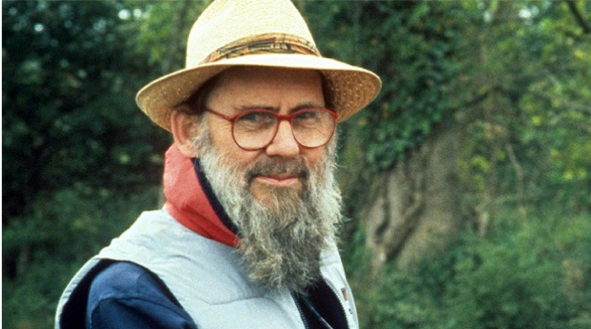 “[John Cunliffe] left his Ilkley home in a deluge of rain on Thursday 20 September, never to return,” read the notice. “Even the skies wept for John, the gifted creator of Postman Pat, Rosie and Jim and author of many earlier published collections of poetry and picture story books for children.”

Cunliffe created the character of Postman Pat Clifton and his black and white cat, Jess, who lived in the fictional village of Greendale after being inspired by his time living in the Lake District. He wrote the show on an old Triumph typewriter in the back bedroom of a house in Kendal and teamed up with the animator Ivor Wood, who had worked on the Magic Roundabout, The Herbs, The Wombles and Paddington Bear.

Cunliffe presented the BBC with 13 stories about Pat and Jess, which eventually aired in 1981 and would be the start of a children’s TV franchise worth millions. He continued to write books about Postman Pat, but signed a deal which meant he didn’t have control over merchandising or the way the character would be developed on screen.

Although he initially concentrates on delivering his letters, he nearly always becomes distracted by a concern of one of the villagers and is always keen to help resolve their problems. Notable villagers include the postmistress, Mrs. Goggins; Alf and Dorothy Thompson, the farmer; PC Selby, the police constable; Pat and Sara Clifton; Jeff Pringles, the teacher; Ajay Bains, driver of the Greendale Rocket and Pencaster Flyer; Nisha Bains, the owner of the cafe; and the local handyman and inventor, Ted Glen.

Greendale is a big, busy village situated in the heart of the Cumbrian countryside. Running through the centre of the village is the High Street, home to Mrs Goggins’ Post Office and shop, an unofficial meeting house for the residents. Located on the edge of the village is the railway station, home to the Greendale Rocket. Nisha Bains runs a popular café there with Sara while her husband Ajay runs a regular schedule on the Greendale Rocket to the nearby town of Pencaster. In the original series (1 and 2), Greendale was much smaller and presented a gentle pace of lifestyle. It had winding roads, along with the trademark bridge, and a smaller population, which allowed Pat plenty of time to enjoy the countryside as he passed through, or even stop on ‘quiet’ days to have a picnic.

Pencaster is a large, bustling, modern town located within easy commuting distance for the villagers of Greendale. Situated on the waterfront, Pencaster is a hive of activity, boasting a market square in the centre surrounded by shops, houses, a large railway station, state-of-the-art buildings, and a boat jetty. It bears some resemblance to Lancaster, the county town of Lancashire, which likewise is a short commute from Longsleddale, the area used as the inspiration for Greendale.

Ingledale is another large, busy village town situated in the heart of the North Yorkshire countryside, only seen once in a special in 1991, set to make a second appearance in the revival.

Cunliffe, interviewed about the series, has said that he chose the character of a postman since he needed a character who could visit the countryside and interact with many different people.

The inspiration for the post office itself comes from one located on the Kendal street where Cunliffe lived when he was writing the original treatment. The post office, at 10 Greenside, closed in 2003.

While Cunliffe visited post offices for inspiration, he has said that the character and village was not based on any one place or person. He commented in 2015 that “I got maybe half a dozen people last year saying they were the inspiration.”